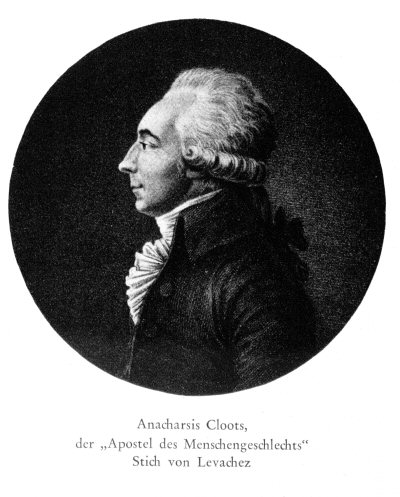 This is one of the very first biography existing on this not so well-known history character of the French Revolution, Anacharsis Cloots. The merit of this book is its weakness: the tone in which it is written. The author is writing in a romantic apologetic tone, which hampers a reflective and critical appraisal of Cloot’s writings and actions. On the other hand, it blows life into a colourful character with an original and synthesising thought. And what a life! Until it was cut short by the revolutionary guillotine, his Prussian origins causing him suspicions of espionage and conspiracy against the Revolution.

Cloots, away from France for some time, came back in 1789 and arrived in Paris 4 August. He saw the national assembly and was taken by enthusiasm. He saw in it the real ecumenical assembly, presided by common sense that will eliminate all the canons of the so-called universal conciliabules (Avenel, 1865: 131).

He claimed that the Assembly should be in Paris, and not in Versailles, “the glory of the eighteenth century is to have created the city” (Avenel, 1865: 137). Other were opposed because the country would not accept Parisian law. He answered “you will all accept it, you, France, and the Universe. Paris is the capital-city of the globe.” (Avenel, 1865: 138)

22 May 1790 a decree by the Assembly gave the nation the right to declare war and peace. Cloots acclaimed this decree because it was signifying the end of the secrecy of alliances in cabinets, of Westphalian treaties and this kind of diplomacy (Avenel, 1865: 175). Paradoxically (for our contemporary eyes) it is the idea of the nation that gave him the idea of the ideal of solidarity of people: if people of the French provinces could unite to form a French nation, calling themselves “brothers,” why not the peoples of the world?

The Parisian commune decreed 5 June 1790 to ask the Assembly for a Parisian federation of France on the Bastille Day 14 July 1790. This event made Cloots dream of a Parisian federation not only of all France but of the whole universe. He wanted to make the same demand but of humankind, including refugees of all countries who had been proscribed from the city (Avenel, 1865: 175-176).

This is what he did, quite famously, on 19 June, Day of the anniversary of the “serment du Jeu de Paume,” “Embassy of humankind,” when he entered the Assembly, or the “ecumenical council of reason”, with a delegation representing humankind, and him being its orator (Avenel, 1865: 177). They were 36 representing “humanity”: Englishmen, Prussians, Sicilians, Dutchmen, Russians, Poles, Germans, Swedes, Italians, Spaniards, peoples from some of the French provinces, Indians, Arabs and Chadians.

He declared that the party on Bastille Day will not only be the one of Frenchmen but also the one of Humankind. The wakening of the French people has been heard away and has awakened other peoples from a long slavery. The wisdom of the decrees voted by the children of France give troubles to despots and hope for nations. Sovereignty resides in the people, but the people is everywhere under the control of despots who consider themselves sovereigns. (Avenel, 1865: 183-184).

Baron Menou answered to him that he proved that all other nations equally own the progress one nation makes in philosophy and the knowledge of human rights. Therefore, the civic national party shall include any free man who wants to join.

From then on is the nickname “Orator of humankind”. Cloots explains that an orator of humankind is “a man penetrated by love for human dignity;  an orator with a scorching love for freedom and who inflame with horror against tyrants; it is a man who, after having received the sanction of his universal apostolate inside the constituting body of the universe, only devotes himself to the free defence of all the million slaves…” He will exile himself from his native land to stay in the capital of independence. His mission will only come to an end when oppressors of the humankind will be overthrown. (Avenel, 1865: 188-189)

He changed his first name Jean-Baptiste because of its Christian origin into Anacharsis, the name of a young Greek philosopher, originally a Scythe who travelled from North to educate himself in Attic and Ionia. He also Frenchifyed his surname as a tribute to France, the country in which freedom was born and from where it should be spread to the world.