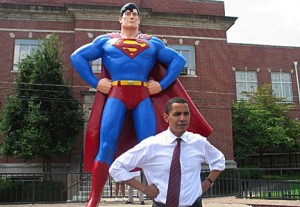 Candidate Obama signed an article in the well-known scholarly journal of international relations Foreign Affairs, July/August 2007, entitled “Common Security for our Common Humanity.” There are a few reasons why Obama can be called a cosmopolitan politician as well as his policy agenda a program for cosmopolitics. One thing that is immediately striking is that there is no reference to American security or the American people in the title of the next president of the United States of America’s foreign policy program. A second thought, is the recognition already in the title of post-modern critiques made to security studies and the way we build our perceptions of security: a country’s security is ultimately a matter of building a global security, and a country’s security is not defined in protecting a state’s interest but humans’. However, the basic spheres of action of the U.S.A. are definitely standard neo-realist ones when it comes to nuclear threats and terrorism.

Obama’s vision of foreign policy is that we’re in it together: “America cannot meet the threats of this century alone, and the world cannot meet them without America.” There is a certain will to engage the USA to more multilateral actions, and especially not to withdraw into a certain form of protectionism and inward focused political energy. The ambition is to continue not only on propagating values of freedom and democracy, but also on being a beacon to the world for these values – the two traditional schools of thought for American foreign policy (Kissinger 1994, 18). However, after the Bush administration these two must be renewed. A direct critique to the Bush administration’s choice of policy in Iraq is made in falsely believing that there only existed a military option when other policies lead to greater security – mainly, as will be shown, improving the international institutions, and financial assistance to alleviate poverty, disease and construct solid democracies. Obama’s novelty is to apply both schools of thought together, and to add a new dimension, which is to create a certain cosmopolis based on the idea of common humanity:

“The mission of the United States is to provide global leadership grounded in the understanding that the world shares a common security and a common humanity.”

This vision of the U.S.A. in the world is led by the belief that it still is the most powerful state – according to neo-realist theory of power (military, economic, political) – and is still, and must be, the leader:

“The American moment is not over, but it must be seized anew. To see American power in terminal decline is to ignore America’s great promise and historic purpose in the world.”

Here there is nothing really new in the messianic dimension that the U.S.A. has itself in the world. Moreover, the U.S.A. will still act unilaterally in case “vital interests” are at stake:

“I will not hesitate to use force, unilaterally if necessary, to protect the American people or our vital interests whenever we are attacked or imminently threatened.”

The whole question is thus how Obama defines these interests. Are these solely military or terrorist attacks? In other cases, Obama committed to a multilateralist approach:

“But when we do use force in situations other than self-defense, we should make every effort to garner the clear support and participation of others…”

Obama cites Georges Bush’s action in Iraq as an example – not W. that is but H. W. – in 1991 when the coalition led by the United States had the “clear support and participation of others.”

Number One Priority: “Halting the spread of nuclear weapons.”

In which key sectors should then the U.S.A. act following these general guidelines? The first priority is nuclear proliferation and security from nuclear threats, especially terrorist acquisitions of nuclear devices. In order to do so, the U.S.A. must act in “active cooperation” with Russia, and principally in reaching a “consensus” on the Comprehensive Test Ban Treaty (CTBT). This is very classical neo-realist international relations.

9/11 is still the reference in foreign policy. In order to do so it is the front in Afghanistan and Pakistan that must be reinforced with American troops redeployed. That means also that troops in Iraq are to be progressively withdrawn. The military budget will however be increased in order to face these challenges. However the way to tackle it is less unilateral than the preceding administrations. Not only does the U.S.A. need to build a global partnership, but Obama acknowledges the existence of a debate within Islam between fundamentalists and reformers, and wants to support reformers. Moreover, assessing previous failures, intelligence must be reinforced, and also must be strongly connected with other countries’ in a network and comprehensive strategy.

“To renew American leadership in the world, I intend to rebuild the alliances, partnerships, and institutions necessary to confront common threats and enhance common security.”

The novelty in American foreign policy is here: a greater commitment to building the institutions to create a world community bonded by common security threats.

NATO, comes first and is identified as the organization for common security. More troops must ensure collective security and more must be invested in this organization. However, nothing is said as to the notoriously American led government of the organization.

The United Nations nonetheless is identified as the organization in which the recognition of rising new powers in the world must be met with reforms:

“In addition, we need effective collaboration on pressing global issues among all the major powers — including such newly emerging ones as Brazil, India, Nigeria, and South Africa.” “We need to give all of them a stake in upholding the international order. To that end, the United Nations requires far-reaching reform.”

Is this a reform of the Security Council? Nothing is clearly stated, but it is already a giant leap that the word reform is accepted as well as the recognition of emerging powers such as precisely the countries named to enter the Security Council with a seat: Brazil, India, Nigeria, and South Africa,

As to climate change, it’s a sea-change. The much awaited commitment from the U.S.A. to reduce carbon emissions is clearly stated. No reference as to the Kyoto protocol and other international instruments to reduce pollution, though, but a clear statement to work with Europe and Asia. A note on national interest: engagement to put an end to dependence on foreign oil, but no prosaic explanation as to how: off-shore drilling or reducing the consumption?

“Finally, to renew American leadership in the world, I will strengthen our common security by investing in our common humanity.”

“To build a better, freer world, we must first behave in ways that reflect the decency and aspirations of the American people.”

Restore America’s role as a beacon, one of the two pillars of traditional American Foreign Policy. “This means ending the practices of shipping away prisoners in the dead of night to be tortured in far-off countries, of detaining thousands without charge or trial, of maintaining a network of secret prisons to jail people beyond the reach of the law.”

Improve US foreign assistance funding, and couple with “insistent call for reform”.

“We need to invest in building capable, democratic states that can establish healthy and educated communities, develop markets, and generate wealth. Such states would also have greater institutional capacities to fight terrorism, halt the spread of deadly weapons, and build health-care infrastructures to prevent, detect, and treat deadly diseases such as HIV/AIDS, malaria, and avian flu.

“As president, I will double our annual investment in meeting these challenges to $50 billion by 2012 and ensure that those new resources are directed toward worthwhile goals. For the last 20 years, U.S. foreign assistance funding has done little more than keep pace with inflation. It is in our national security interest to do better.”

“There are compelling moral reasons and compelling security reasons for renewed American leadership that recognizes the inherent equality and worth of all people.”

The new generation of leaders is telling a new story, a kind of new telos or “grand narrative” (Lyotard 1984) which in fact is this cosmopolitan narrative of a common humanity:

The novelty in Obama’s foreign policy is perhaps less the content, although it is a drastic return to a prior Bush administration – and Clinton administration –, than the form. The role of the U.S.A. in the world, the leadership for democracy and freedom is not new, but a traditional role. The role of the U.S.A. as a beacon isn’t either. But Obama wants both, and he wants to be a global leader in building a strong partnership toward a common goal which is humankind. In order to achieve such a goal, the American people but also the people of the world must participate by understanding and agreeing to policies taken:

“This is our moment to renew the trust and faith of our people — and all people — in an America that battles immediate evils, promotes an ultimate good, and leads the world once more.”